Not everyone can say they have rescued a carrot. Since last week, I can. But why did I want to save a carrot in the first place?

We all know people are starving in this world. The problem
isn’t that we are too many people on this earth to feed us all, a bigger problem is
that in countries like Sweden a huge amount of the food produced is being
thrown away. Like the carrot I mentioned above (and lots of other carrots, and lots of other foods). After a long time of being angry about this, I was happy to find
Rude Food who tries to do something concrete. I decided to follow one
of the food rescuer, Dennis, on his weekly round to save breads and vegetables
from an obscure future in the dumpsters.

So how was
the rescue round? Did I feel as much of a super hero as the name “rescuer” inclines?
Actually, yes. Maneuvering the big bike (an open source cargo trike by Woolfer/XYZ Bikes’) was tough; the big box in
the front of the bike is both heavy and sharp and I had to zigzag my way
between lamp-posts and people in order to avoid any bloody (or juicy) accidents.
Several times I was almost hit by a car. My sweaty effort paid well off though;
on my first food rescue round 42 kilos of carrots, breads, cauliflower and other
amazing stuff were saved into a lovely meal. And that’s were food really should
be, right? To me these food rescue rounds aren’t so much about saving food that
would otherwise go to waste, as to acknowledge the problem of food waste by
really dragging the waste out of the dark and put it all on the table, literary
speaking. Also, finding the very carrots you rescued transformed into a beautiful carrot chutney at a brunch buffé is a great motivation for a food rescuer to do it all over again. For the first time in my life, I’m able to say “I love the taste of waste”. 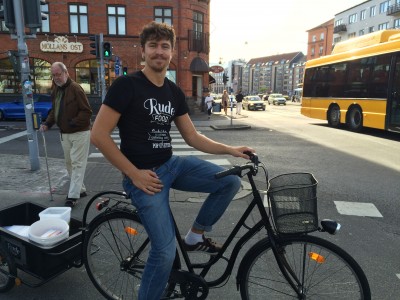 Say hi to Dennis, one of Rude Food’s rescuer!

Posted by Coni Thu, October 20, 2016 11:24:04 I bite into an apple and think of the sun. I think of the apple tree and its extraordinary capacity to store the sun’s energy in the form of Read more…

Posted by Zeenath Tue, September 01, 2015 08:55:04 Dear engineering students assigned to the Rude Food packaging project, I think back to our brief introduction session together earlier this week and I am both enthralled and apprehensive Read more…