I bite into an apple and think of the sun. I think of the apple tree and its extraordinary capacity to store the sun’s energy in the form of glorious crisp sweetness. I go into a supermarket and think of monoculture fields that extend beyond the horizon. I think of depleted land, poisonous chemicals, intensive fossil fuel use, assembly lines, cruelty and shameful minimum wage. Where does gratitude stand in the queue for the cashier?

During my master’s studies at Lund University I came in contact with Rude Food and encountered a heterogeneous, organized and motivated group working to prevent food waste. Shyly but surely I increased my participation until I was integral part of the weekly routine, particularly with the food rescue team. I was a steady and committed Rude Food volunteer for a little more than a year, mainly during 2015/2016 up until I relocated to another (more sunny) country. My volunteering experience provided me with many delicious free meals, new friends and a thesis topic: how is it possible that food waste is such a widespread and normalized occurrence? I observed that when edible food intended for human consumption is tossed into the garbage it is never intrinsically waste but it becomes waste through a very powerful, unquestionable (irrational) logic. How and why does that happen? These questions inspired my research.

Most of the active 2015/2016 volunteers where part of my research so it’s long overdue that I share my conclusions. Here it goes. 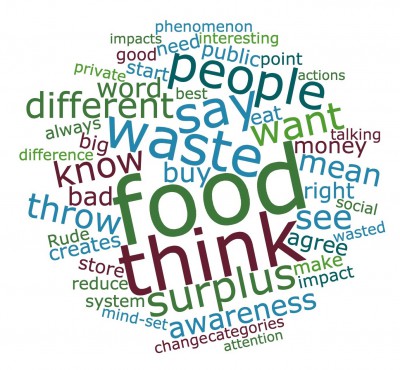 Image 1
Word cloud that illustrates by size the words most frequently used in the focus group with Rude Food volunteers that was part of my research.

Food is powerful far beyond basic nutrition. Food is located at the point where we articulate the human relationship with nature and where we make sense of social life. In my view, food is the inspiration and the site for flourishing answers towards a sustainable future.

In mainstream western industrialized culture food is framed, talked about and brought into existence as a disposable commodity; which poses a big environmental, social and ultimately ethical problem. The food you will eat today is most likely the product of industrialization, brought to you after being categorized and standardized though a process widely taken over by international corporations that plunder and deplete natural resources ruled by a draconian profit-oriented logic*. Only through a money-making logic it makes sense for abundant food surplus to become food waste. That is how I addressed in my thesis – titled “The Food Waste Paradox from a Critical Discursive Perspective” – the problem of food waste as a problem of discourse and irrationality. It’s a perspective where food, capitalism and culture are related and where the work of the Rude Food volunteers has the potential to change the dominant (capitalist) discourse. 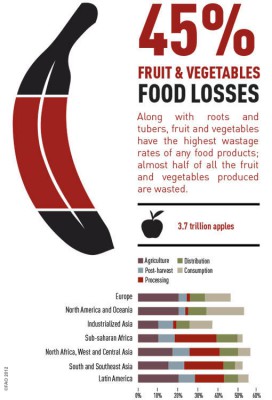 Image 2
Data from SAVE FOOD: Global initiative on Food Loss and Waste Reduction

I start from the fact that food waste is inadequately defined by the institutions that have the power to discursively frame the problem and so I come up with my own definition: food waste is that surplus of food that has been excluded from human foodways** for reasons unrelated to its use-value and rather determined by a failure to contribute to exchange-value. This definition is more adequate as it opens up the possibility to restitute value to a marginalized materiality whose use-value might still be intact despite the fact that it could be framed worthless for the industrial economy. 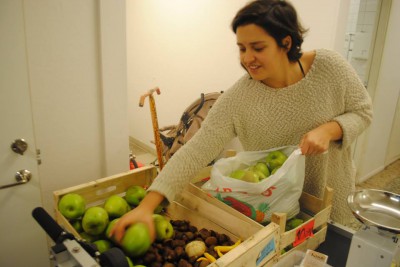 Image 3
The author during one of the mentioned weekly rescues. Notice the scale on the right side, where the bounty was meticulously weighted and the out-of-focus hand depicting speedy enthusiasm.

In my analysis, the work done at Rude Food entails a discursive shift of meaning towards the recognition of the use-value of food waste and therefore a refocus on it as a food surplus, never a kind waste. In its work Rude Food is also negotiating a new relationship with capitalism not only as a questionable mode of economic organization but also as an ideology (in the sense of producing and reproducing power relations).

Image 4
What does food waste look like? One example as to how the Rude Food team is creating new meanings. For the FAO food waste looks like a rotting inedible orange but for Rude Food the image of food waste is something delicious: a brownie made with coffee grounds or a colourful vegetarian spread.

The challenge is overwhelming – don’t we know it – but initiatives such as Rude Food, where people are engaged as active participants; as organized agents of change and not merely passive consumers are vital for the systemic global change that is not only urgent but mandatory if we are going to “limit global warming to well below 2°C”, a target so ceremoniously pledged in the Paris Agreement (COP21).

We need to break away from the perceptual framework that normalizes the commodification of food and for this we need to challenge the status quo, which means to question the puzzle as a whole. Only then we can see that it’s not good enough to replace some pieces of the puzzle with new ones painted in green. The solution is much more radical and demands creativity: it’s to insert square pegs, leave empty spaces, make holes on the table, attach ropes and leverages to create a totally different mesh of logic that expands in different dimensions and engages the human element differently. And the work done by Rude Food is a step forward in this creative path.

To sum up: keep on keeping on Rudefoodies!

You can read my thesis here.

Constanza Hepp, MsC. Activist and writer based in Italy.

*Note that this process accounts for 30% of the world’s total energy consumption (FAO 2011) and up to 51% of GHG emissions (Worldwatch Institute).

**The concept of foodways refers to the socially regulated patterns that determine what is considered food, how it is eaten and why (from the book Food and Society: Principles and Paradoxes by Amy Guptill, Betsy Lucal and Denise Copelton, 2013).

Posted by Zeenath Tue, September 01, 2015 08:55:04 Dear engineering students assigned to the Rude Food packaging project, I think back to our brief introduction session together earlier this week and I am both enthralled and apprehensive Read more…