‘To bring food closer to the Eater’

‘To bring food closer to the eater’ (Att ta maten närmare människan) is Jens Almqvist’s undergraduate essay at the Department of Sociology, Lund University. His essay takes a ‘local perspective on the food industry in Malmö and suggests that local food workers, producers and consumers are engaged in resistance to rationalization and globalization. By applying theories of Baumann and Habermas the study discusses how the modern-day relationship to food could be understood.’ 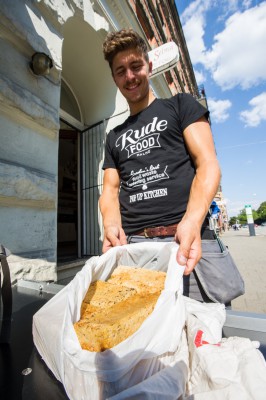 Heather, chairman of the Rude Food board, who became involved in Rude Food via the dumpster diving movement describes how she was attracted by Rude Food in order to have the opportunity to “engage in food business on a larger level than that of dumpster diving for ones own sake “

Edith, cultural anthropologist, secretary of the Rude Food board, farmer and manager of Gro’Up – a meeting place in Malmö that has the food as a starting point sees no limits to how food can act as an active part of society and describes how she wants to “help us understand food differently.”

Zeenath, socially engaged designer, educator and initiator of Rude Food, describes how “Rude Food is more than just cooking things before they go bad. It’s bigger than that. It’s about asking questions about what’s going on … about the microbial connection stemming from our guts to the global food system.

Posted by Coni Thu, October 20, 2016 11:24:04 I bite into an apple and think of the sun. I think of the apple tree and its extraordinary capacity to store the sun’s energy in the form of Read more…